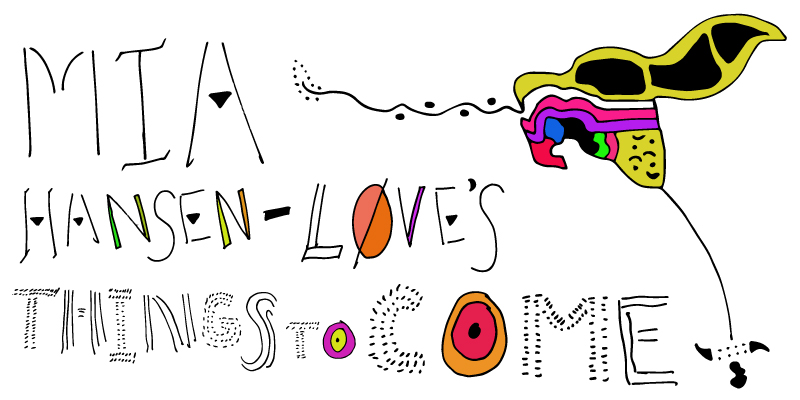 Things to Come offers a moving humanist portrayal of endurance amidst unsentimental tragedy, as it depicts the life of a middle-aged philosophy teacher who must handle a series of crises within a short period. Writer and director Mia Hansen-Løve, at surface, delivers a quiet and straight-forward film of a life falling apart. Yet, with delicate brilliance, complexity abounds, as the viewer is led into the deep workings of a resilience and strength needed to preserve wholeness during troubled times.

For Nathalie Chazeaux (played by the masterful Isabelle Huppert) there is much to look back upon that has been lost within a small span: her husband leaves her for a younger girlfriend; her unwell elderly mother must be put into a home and will eventually die; her textbook she created for schools is being turned down for re-publication. Amidst these concerns, and several others that grow as the film progresses, is the overwhelming memories of her life. How does one deal, in particular, with a 25-year marriage now lost completely? What does one do with a life of memories seemingly erased in an instant by another’s negation of that life? At one point, having lost everything, she realizes her freedom (or what she calls “freedom”): the fleeing of all her responsibilities and ties. But to lose the world one held is to dig deeper into what is left. What arrives, naturally, are questions of identity, meaning, and purpose: an emptied world further emptied of direction, all of it held captive by disorientation and loneliness. One is never truly free from the self, and certainly here it rises to greet her; underneath the world’s dissolution lies her linkage to some raw form within her, a statue hidden in a block of stone.

…a moving humanist portrayal of endurance amidst unsentimental tragedy…

Underlying the entirety of this film may in fact be the sense of time. Various generations are always interacting, old life dying and a new life born, as these life cycles surround Nathalie who stands as if center to their revolutions. Her aging and anxious mother is a revelation of her own future, what beholds the elderly. At the other end, her former student Fabien, a passionate and philosophical anarchist, holds as if a memorial to her once vivacious past. Her daughter’s baby is an even further point back and bookends the death of her mother. Her daughter and son are the constant reminders of her marriage and former husband. She is stuck between these various points of age as in a web, given glimpses into the life she had, or something akin to it, and the one waiting for her.

Time is not always a matter of moments or events, though Nathalie does ponder these, but a relentless force that must be reckoned with and constantly managed. Time presses in at all sides, and Nathalie in her state of various griefs must live with these markers, vague guideposts, leading to unknown points. The past may be filled with regrets, and the future is a murky territory (if anything, consumed by retrospection), but it is the foggy present of which she must take reigns.

Fabien is one of starkest points in her newly troubled life. A former star student, he has written essays for her publications, maintains philosophical interest, and keeps in touch with her. He offers her a new energy and a young passionate life of philosophy, action, and hope. When everything has fallen apart, she visits him and his friends, proclaimers of anarchism and a radical journal, on their co-bought farm in the French countryside. It is an idyllic life of intelligent thinkers talking large philosophical concerns, gardening, and animal caretaking. She is, of course, a little on the outside of it all. There but not there, a kind of ghost to their mission and daily tasks.

Time is not always a matter of moments or events, though Nathalie does ponder these, but a relentless force that must be reckoned with and constantly managed.

Amidst her visitations, Fabien challenges her, saying that she has not given her philosophy over to a different lifestyle. Of course, he implies that she is still bourgeoisie. And Fabien, lost to his own idealisms, comes away a little too angry and cocky, though later he regrets the exchange. His idealism and values upturn the long years she’s lived, ultimately forcing her to question her trajectory. But her trajectory is also that very upturning and unspooling of her life into something new. That, in itself, seems to be the ultimate challenge of her as thinker and philosopher: how the real world interjects with her thought, and how her thought has led her to this destiny of dealing with the real world again. A constant dialectic between her thought and life. Is Fabien’s critique just? Perhaps. But he is naive to think his own life doesn’t represent a retreating from the everyday, a cloistering from tangible world problems, and he is too proud to see that her wisdom and history of experiences may in fact be a wellspring of understanding. As for Nathalie, in the dark of circumstances so late in life, she is being refined, a new understanding welling up in her, and the hope forward is in the forms of fresh desires she must seek by having lost everything, and the provocations of even her closest and most respected friends and family.

It cannot be overlooked that the societal expectations of older women, the unjust views of them being unattractive or unwanted, is of concern here as well. Several times Nathalie herself mentions it. She feels, mirroring her mother’s own history and insecurities, as if abandoned and adrift in the world. But the cold reality of the world’s expectations, though met by her push through, is not without its frantic stride, constantly moving and putting out the fires of her calamities. Who can blame this frantic living in the midst of losing so much? A freneticism further provoked by the destructive forces woven through a patriarchy that has directly hurt her in the form of her husband’s leaving. Though bourgeoisie, and first world privileges are evident, still, she lies under the weight of society’s constructs, the built-in negative perceptions of older women, even if subtle, as well as the corrupting male gaze that has shaped the societal fabric, and one of the many factors of her life’s undoing. Nathalie survives these forces with an urgent fortitude, an assembling of all her faculties to do what is needed, but not without the deep weight of these forces having pushed her to handle it on her own.

But, it is certainly what she has discovered when everything is stripped away that helps her defend against these outer forces. In being freed of all responsibilities and ties, she is also, in some senses, free of the world’s unjust expectations and perspectives of her as a middle-aged woman. Though she lives amidst the masculine power structures and paradigms, there is something much deeper that no person or system can get at, and this inner depth and drive and spirit, is her truest self come alive. Those conquering moments, however, are quiet and plain-seeming, and, in Isabelle Huppert’s hands, gracefully delivered in an almost underacted sort of way, as if imbuing her own personal experiences and reflections into a role almost written for her.

Things to Come’s simplicity and narrative movement hold no pretense, and the film offers a realism that hits with the hard reality of sadness and loss without the exploitation of the viewer’s own heart. Strikingly, for all of the films numerous cataclysms, Hansen-Løve has created a balanced drama that does not lend itself the further tag of melodrama. It is emotional without being manipulative, raw without being under-stylized. The thoughtful philosophical interjections, from conversations or in Nathalie’s classroom, pondering quotes from the likes of Rousseau and Pascal, only tend to augment the deeper and inner emotional core of this woman, counterweight her heart-wrenching catastrophes with reason and observation, and give words to her real experiences. Things to Come is, at times, a sad and grim observation on survival through difficulty, but it is also an ode to the triumph of human spirit and the potential strength carried in each of us to overcome our darkest moments.

Luke Bartolomeo was the editor of the literary magazine, The Monongahela Review (monreview.com). He's now focused on writing long-form fiction and reviewing movies! He resides in Philadelphia, PA. IG/TW: @daysundertow View all posts by Luke Bartolomeo