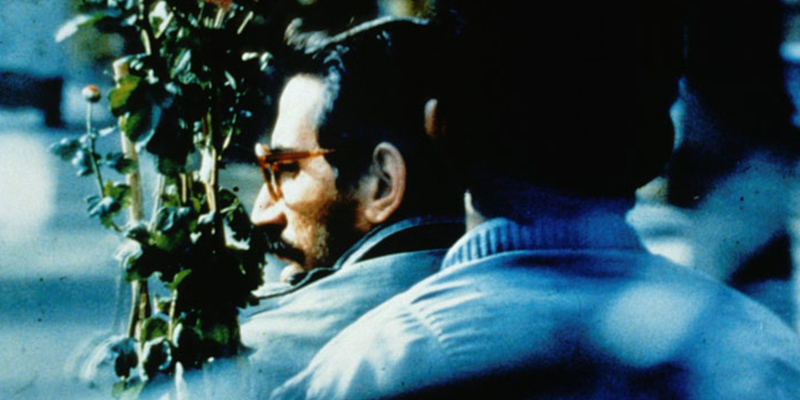 Close-Up (Nemā-ye Nazdīk) follows an Iranian man, Hossain Sabzian, who is accused of fraud for assuming the identity of the famous Iranian director Mohsen Makhmalbaf. He meets a woman on a bus and, after she notices him reading the script for Makhmalbaf’s The Cyclist, he says he is the director and eventually, after talking with her, he comes to her house and says he wants to film her and her family, assuming the role of the director and telling them how the film will look and what shots will be taken, as well as acquiring money from them.

This film is a documentary and also not one. Kiarostami weaves throughout the actual filmed trial of Sabzian reenactments by all those involved of the scenes leading up to his arrest.

Here are three notes on this wonderful film:

1) Life and art can be the same thing.

Sometimes, for an artist, it is to assume some aspect of life, to be it if only for a time, from which derives this mode of great expression, of making, of conveyance. But therein lies the rub: assuming another life for a moment can become your whole life. The question becomes who am I if I am only ever everyone else I have ever tried to understand, out of which I have tried to convey something greater about living? It must be asked how really are you living for yourself and for others if you are always in the mode, as William Carlos Williams puts it, of having this necessity to record. Sabzian assumes the role of an actual artist in order to create a story that is his life. He sees his greatest role he would like to play is himself, and yet that self is what he has attained from how he has been most affected by a famous director’s films and how he acts like him. He’s disconnected from himself, but yet also very connected to all of life, so that living his life is also mimicking it, is also becoming this symbol of other people’s experiences, their dreams and wishes and desires. Art isn’t imitating life, nor life art, but art is life and life is art. They can’t be so easily parsed, and so in the end he lives out life more interestingly, more vivacious and risk-drawn, than one might view him at first. He has taken the bold way to living by not making art and life so binary, and ultimately his disconnection from himself, acting as another, reconnects him back to who he is.

2) Acting out life copes with life, and is also the mechanism of change.

Sabzian says he’s been so affected by Makhmalbaf’s films that he assumes the role of the one who’s created them, which if we are calling the artist someone uniquely sensitive to the basic fundamentals of the human condition, in truth he really has helped to create these fundamentals, not in the sense of actually making the films he said he did but that he is collectively creating this thing called life. The interconnectedness between his heartfelt perception and sensitivity toward the films of this famous director and his own life, its conflicts and woes and troubles, mesh with each other and form for him catharsis, a way of coping with his very real struggles because he sees they are not just his problems, but human problems that are felt and created by all of us collectively. The films have called out of him a sense of what his life is to him, and yet strangely they have also pulled him away from it, and made him want to make for his life the role of acting someone else’s. This acting becomes the mechanism by which he moves forward and learns more about who he is. It forces him to reevaluate. He mimics an artist in order to become an artist, in order to create for himself some sense of vision and purpose for his life, which brings him to further understanding humanity in whole.

3) Fraud is a state of mind and so is reality.

The courts see his actions as fraud, as an offense, and the family bringing the complaint to court also sees it this way. He does not see his actions as fraud or a con, but as something very real. He did get money, however, partly believing that as an artist you need money to live. Did he receive the money merely because he wanted to steal from them, or because he was acting as an artist receiving money for his efforts, and who needs it in order to survive and be an artist? It’s curious what his true intentions were, and like any good actor he doesn’t seem to be so straightforward with the way the courts and the family perceive him. A tremendous irony of the film is that the very family who have brought this complaint to the courts in the end agree to reenacting some of the scenes leading up to the trial, so that they too become, like him, actors in their own lives, reenacting out their own biases and dispositions towards what he’s done. Also, the fact that the real trial was filmed and woven through this “documentary” makes for another curious layer. What is reality in this film is sometimes hard to say, and Kiarostami wants it that way. He turns the court room scene into art, into a drama. He is ultimately subverting the courts and the family by pushing them into becoming actors in the same way Sabzian was. Everyone, under the camera lens, becomes a fraud or a con. Reality shifts, but truth doesn’t. We are being deceived when we watch this film, and in the end we’re forced to give up on knowing what’s real or not, accepting the deception in order to see the meaning behind it.

Luke Bartolomeo was the editor of the literary magazine, The Monongahela Review (monreview.com). He's now focused on writing long-form fiction and reviewing movies! He resides in Philadelphia, PA. IG/TW: @daysundertow View all posts by Luke Bartolomeo